Even the title is interesting in its omission of the terms cryptocurrency and blockchain.

The basic concept they were evaluating was that of central bank controlled digital currency issued for the benefit of retail users (individuals and non-banking businesses). These would exist alongside existing fiat currencies and be intended for domestic use primarily. Their value would have to be tethered to the related fiat.

* CBDC could be the next milestone in the evolution of money.

* It is a digital form of fiat money, issued by the central bank.

* The ability to meet policy goals is one major issue.

* The demand for CBDC depends on the attractiveness of alternatives (cash, e-money).

* The case for adoption could vary from country to country.

* Cross-border usage would raise a host of questions.

Many Central Banks are Studying

A number of central banks around the world are studying CBDCs. This table from the IMF report indicates their publicly stated rationales, which include diminishing use of cash as other payment channels e.g. mobile become popular, efficiency gains for payment and settlement, and greater access for the unbanked or lightly banked to financial services. 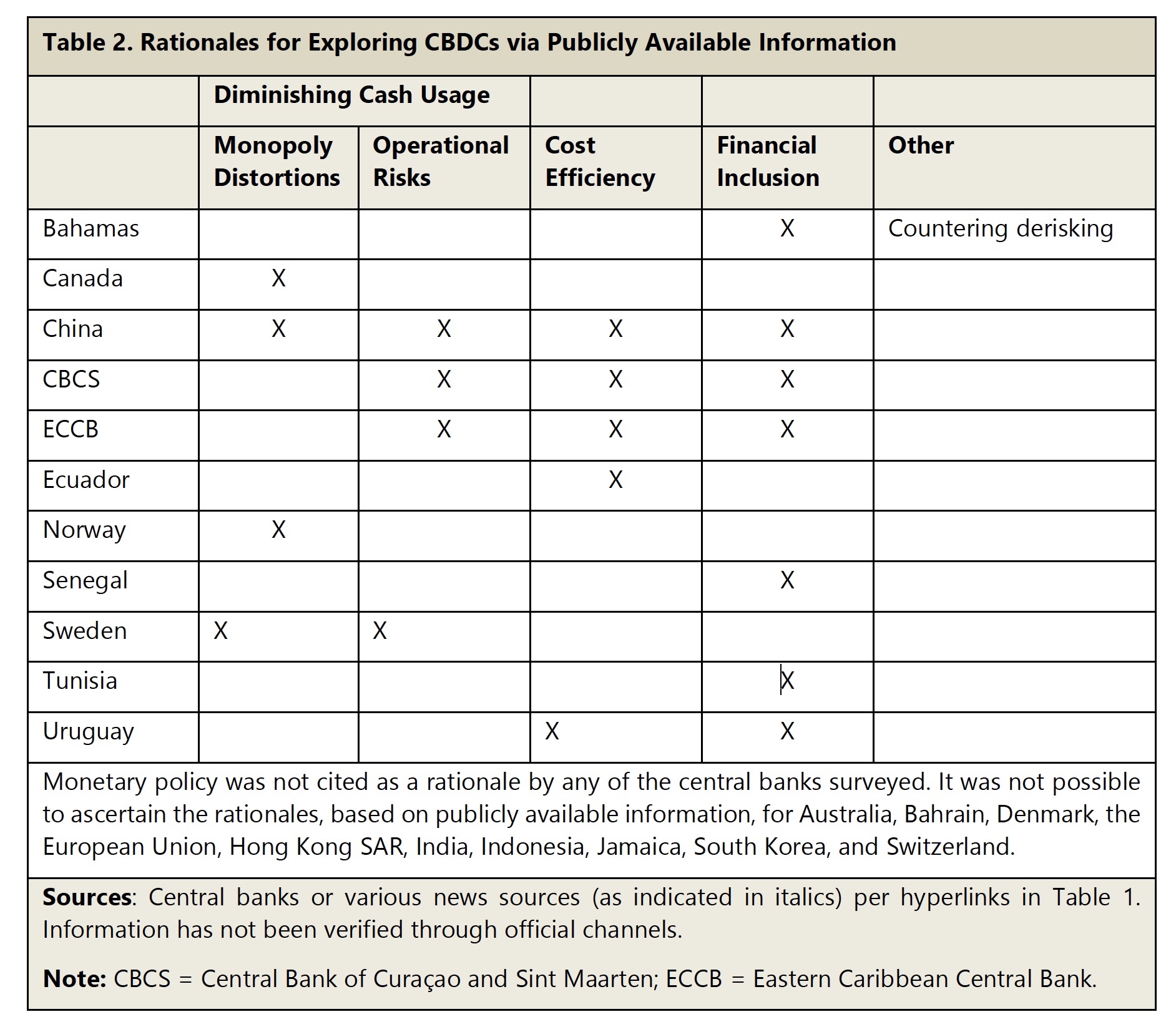 But the key point is that CBDCs are quite antithetical to Bitcoin and mined cryptocurrencies in general (we exclude in this comparison airdrops, premined, and other largely centralized, but private, forms of cryptocurrency). CBDCs are closest to the tethered cryptos, but maintained by the fiat issuing authority itself.

There is very little in common between Bitcoin and mined cryptocurrencies in general, and hypothetical CBDCs. Most existing fiat is already digital; a small portion is cash.

The main new alternative, besides existing fiat cash, for CBDCs are private payment channels (private e-money) such as PayPal and M-Pesa in Africa. These are similar to stored value cards with prepaid fiat balances, but with mobile interfaces. Here the account balances are managed by private companies, usually with a known partner, and a user needs to trust the company holding the balance.

Both new private money channels and CBDCs threaten to disintermediate balances held in bank checking and savings accounts. So do cryptocurrencies, of course.

These balances are used as reserves for banks to issue loans, so if they were moved to a cryptocurrency or a central bank ledger they are no longer available for lending (fractional reserve banking).

A fundamental difference is that cryptocurrencies are assets whereas fiat money is debt-based, created when banks issue loans. CBDCs in their basic form are not available as reserves for bank lending.

CBDCs would in essence just be a different form of fiat, tethered to fiat, and with the same accounting unit and value.

Cryptocurrency represents a challenge to the banking system and to central banks. It seems that the IMF may be encouraging central banks to sacrifice the interests of banks in order to maintain, and even increase, their own power.

The CBDC framework, like cryptocurrency, would move deposits away from the banks. Unlike cryptocurrency, which holds balances on an open ledger, accessed by private keys, CBDC balances would be held for individuals and businesses at the central bank. This means the central banks would be able to restrict access to funds owned by individuals. One can assume they would do this during crises or under court order.

Central banks could even apply interest to CBDC deposits, possibly even with negative interest rates during times of slackened growth.

Fractional reserve banking and the economy as a whole are based on the provision of credit by commercial banks, backed only by a small percentage of reserve balances held with the central bank. If deposits move in large amounts to CBDCs or cryptocurrencies, both of which are assets in the name of the depositor, the system of credit provision in the economy will have to be significantly transformed.

Or a system that allows banks to participate and hold reserves based in CBDC would have to be developed.

CBDCs of the simplest type discussed in this IMF paper seem like a way to protect the prerogatives and increase the power of central banks, and co-opt cryptocurrency. The losers would be traditional banks because their lending power would be decreased.