Cryptocurrency mining pools have become larger. A new list, CryptoSuper500 tracks them according to economical value, computational power, and by extension, energy use.

If you are following my colleague Dr. Stephen Perrenod‘s blogs and reports, you know that he, and the rest of us at OrionX, aim to keep on top of business, technology, and policy issues surrounding this technology and take a realistic approach to what Cryptocurrencies can do, and under what circumstances their use is a wise choice.

The amount of energy that is used for crypto mining has been a source of controversy.  It only applies to cryptocurrency mining via Proof of Work (PoW), where the “work” is computationally intensive. PoW mining is important since it represents the most effective consensus algorithm to maximize security in a decentralized manner.  Mined cryptocurrencies continue to be in demand, with relatively high values. We expect this to continue despite significant ups and downs. We also expect efforts to create Proof of Useful Work (PoUW), but that is proving elusive at present, though I have not seen a proof that it cannot be done.

There are many other cryptocurrencies where the coin is not mined at all. Those tend to offer faster transactions and consume less energy. There are a few models here.

“Proof of Stake” (PoS) is the most prominent of what I call the “Proof of <insert costly thing>” approaches. Other well-known models include Byzantine Fault Tolerance (BFT) and Directed Acyclic Graphs (DAG). These algorithms do not mine and thus do not make use of specialized supercomputer resources. They are fine for many use cases and are produced more readily, but they tend to have lower security, and none are fully decentralized solutions.

So PoW mining uses substantial computing power, but it delivers something that is important and in demand. And if you look at other ways of achieving trust, it turns out that they are expensive in one way or another. So advocates believe crypto mining energy use compares favorably with the energy costs associated with traditional mining, refining, storage, and transport of precious metals.

So the list at Cryptocurrency Supercomputing, the large-scale cryptocurrency mining operations which are typically powered by accelerator technologies such as GPUs, FPGAs, or custom ASICs. Bitcoin is the most notable of such currencies. Scroll down for the full table.

Keeping track of these looks very similar to the TOP500 list of most powerful supercomputers. A list that has spawned variations that look at different use cases, for example, the Green500, Graph500, and IO500 lists. CryptoSuper500 was inspired by those lists.

We issued the following press release today to formally announce this list. Read it below or here and scroll down for the full table.

Inspired by the TOP500, biannual list of the most powerful cryptocurrency mining pools tracks compute power and energy use

“CryptoSuper500 tracks supercomputers that are used for cryptocurrency mining, an intensive application that has become a driver of technology development and investment decisions globally,” said Dr. Stephen Perrenod, OrionX Partner and Analyst and the developer of the CryptoSuper500 list. “The growth of the cryptocurrency market has put the spotlight on emerging decentralized applications, the new ways in which they are funded, and the software stack on which they are built.” Cryptocurrency technologies include blockchain, consensus algorithms, digital wallets, and utility and security tokens.

The top 5 pools are BTC.com in China with projected annual economic value (AEV) of $694 million, followed by Antpool based in Hong Kong with an AEV of $582 million, SlushPool and ViaBTC, both in the USA with equal AEV of $444 million each, and BTC.Top of China with an AEV of $400M. The full list is attached below and is available with additional explanation in a slide presentation and white paper at OrionX.net/research.

Cryptocurrency mining via “Proof of Work” is important since it continues to represent the most effective consensus algorithm to maximize security in a decentralized manner. Cryptocurrency Supercomputing refers to large-scale cryptocurrency mining operations which are typically powered by accelerator technologies such as GPUs, FPGAs, or custom ASICs. Bitcoin is the most notable of such currencies.

Other protocols and methods including premining, Proof of Stake, and Byzantine Fault Tolerance, eschew mining and thus do not make use of specialized supercomputer resources. Such tokens are produced more readily, tend to have lower economic value and security, and none are fully decentralized solutions.

At the same time, the amount of energy that is used for crypto mining has been a source of controversy even though it compares favorably with the energy costs associated with traditional mining, refining, storage, and transport of precious metals.

“TOP500, Green500, IO500, HPCG, and now CryptoSuper500 all point to the growing versatility of supercomputers,” said Shahin Khan, OrionX Partner and Analyst. “It is time to more explicitly recognize that supercomputers are, and will be, central to important new business applications. I expect we will see similar competitive lists for AI, Quantum Computing, and public Cloud providers.”

The TOP500 list of the world’s most powerful supercomputers is eagerly awaited twice a year, and the top position has been a matter of national pride and intense competition among vendors.

CryptoSuper500 is the first compilation of such a list across multiple cryptocurrency types which use different mining algorithms and blockchain protocols. CryptoSuper500 uses the economic value of the mined coins produced to make comparisons across coin types and mining pools when rank ordering the list. The first release of the list includes the Top 30 mining pools and their daily economic production, considering which crypto of the top 5 was produced.

About OrionX
OrionX is a Silicon Valley firm with a new model that combines technology research, market execution, and customer engagement. More than 60 technology leaders in virtually every technology segment have trusted OrionX to help set new break-away strategies, ignite brands, and grow market share. Visit us at OrionX.net. 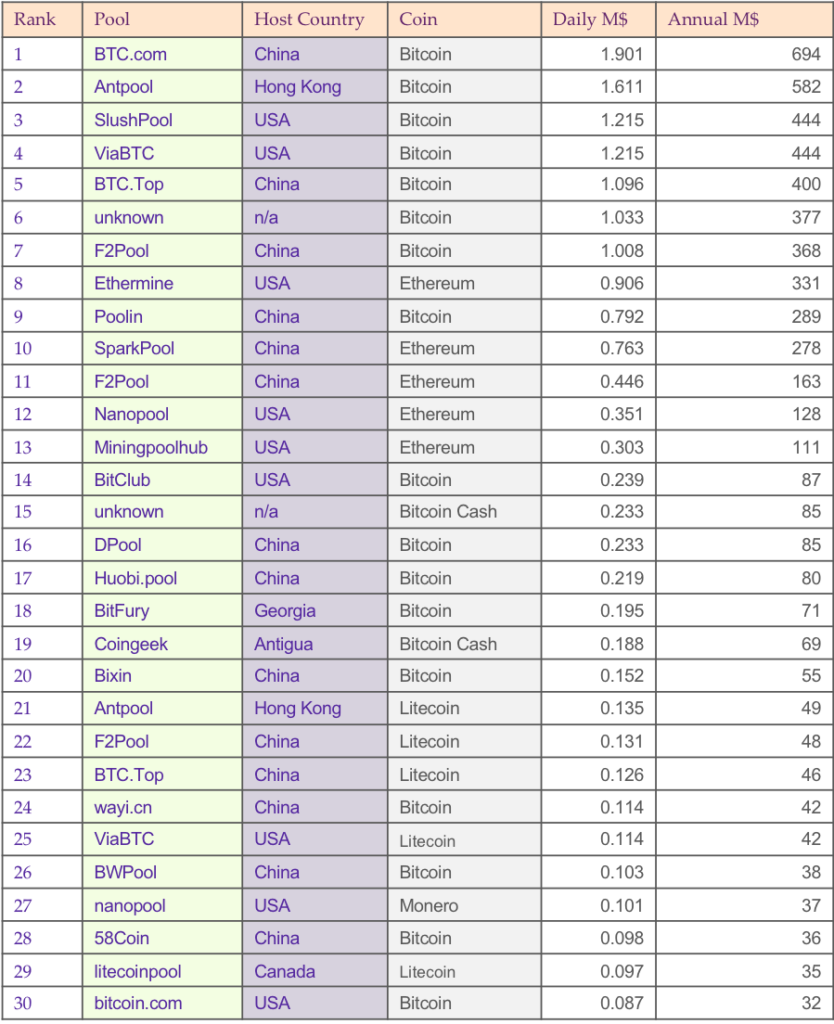 Shahin is a technology analyst and an active CxO, board member, and advisor. He serves on the board of directors of Wizmo (SaaS) and Massively Parallel Technologies (code modernization) and is an advisor to CollabWorks (future of work). He is co-host of the popular RadioFreeHPC (“Car Talk” of supercomputing), OrionX Download, and Afero IoT podcasts.